You are here: Home / Caffeine Basics / A Quick Inventory of Caffeine’s Effects 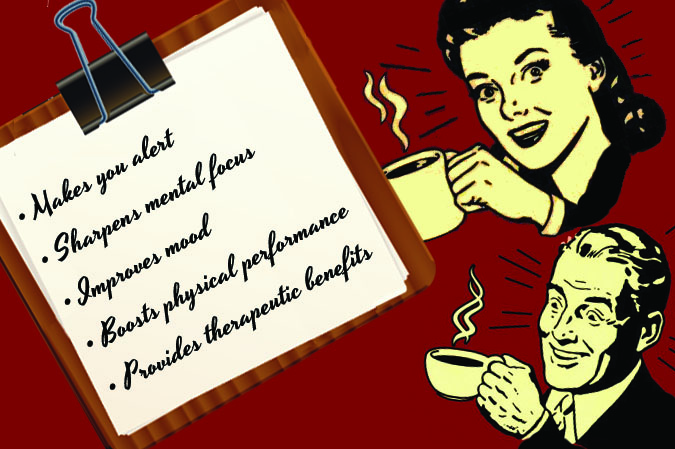 Nobody forces us to ingest caffeine. It’s not necessary. We choose to do so.

In studies where participants didn’t know they were ingesting caffeine, they opted for caffeinated beverages over non-caffeinated ones. This suggests that something in caffeine makes our brains love it, or at least want it, whether we know it or not.

So even without understanding how caffeine works, it’s easy to understand our attraction to caffeine. Here’s a rundown of the bells and whistles that come with a low to moderate dose of caffeine (100-200 mg for most people, and no more than 300 mg):

Sharpens mental focus: Attention spans last longer. Under caffeine, concentration improves. Memory may or may not improve, but caffeine appears to protect against memory loss, especially when you’re under stress. (Benefits to memory are inconclusive.)

At the same time, caffeine can be fickle and flighty in its actions. Caffeine can benefit the heart by dilating coronary arteries and speeding up oxygen delivery. In the brain, caffeine has the opposite effect; it constricts blood vessels, reducing pressure and blood flow to the brain, and relieving headaches. In the lungs, caffeine relaxes bronchial tubes, making breathing easier.

I'm an author and journalist specializing in food and cooking. Caffeine Basics is my ninth book. I've written about the U.S. wine industry, international foods, shrinking your "cookprint," and cooking with kids. Great Bar Food at Home was a James Beard Award finalist, and Cooking Green: Reducing … END_OF_DOCUMENT_TOKEN_TO_BE_REPLACED