You are here: Home / Buzz / Why Bees Buzz to Caffeine 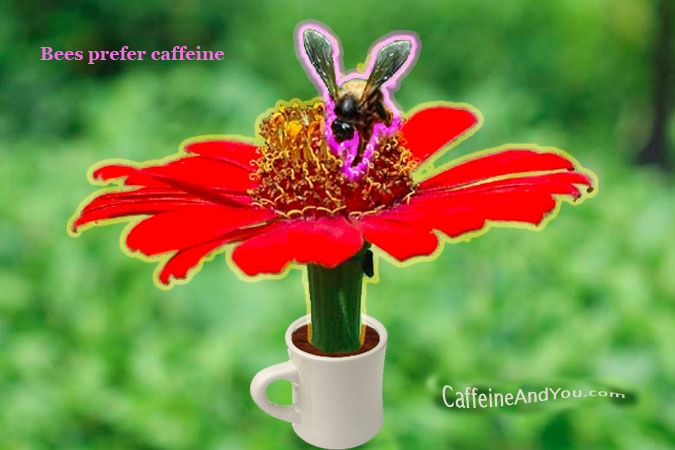 As it turns out, bees like caffeine. Maybe that’s why they buzz…

Bees, as we know, are important for pollination and help ensure plant species survival. Apparently, as with humans, caffeine is attractive to bees in moderate levels, but it’s toxic in high levels. Is this nature’s way of getting bees addicted to certain plants?

Given a choice, bees will select mildly caffeinated nectar over non-caffeinated nectar. Bees also prefer nectar with some nicotine, another stimulant that can be toxic to other insects and animals. But when levels of caffeine and nicotine are higher than found in nature, these substances become toxic to bees.

In 2010, the University of Haifa released a study indicating bees prefer nectar with small amounts of caffeine. Floral nectars vary in their concentration of sugars and other substances. Caffeine amounts vary, too, and are most highly concentrated in citrus flowers; grapefruit flowers have about six times the caffeine as other citrus – and bees find citrus, especially grapefruit, to be quite fetching.

Bees clearly preferred nectar containing nicotine and caffeine to the “clean” nectar, but only when concentrations were similar to those found in nature. Given the choice of higher levels of caffeine and nicotine versus clean nectar, the bees preferred the clean nectar.

Do Bees Get Hooked on Caffeine?

“This could be an evolutionary development intended, as in humans, to make the bee addicted,” states Prof. Ido Izhaki, one of the researchers who conducted the study.

So did addictive (or addictive-like) substances in nectar evolve to make pollination more likely and efficient? Based on the results of the study, researchers surmise the plants that raced to the top of the natural-selection class are ones who developed “correct” levels of these addictive substances. They hit the sweet spot, enabling them to attract bees but not repel them, thereby giving them a significant advantage over other plants. The researchers emphasized that this study has proved a preference, not addiction, and they are examining whether bees do indeed become addicted to nicotine and caffeine. 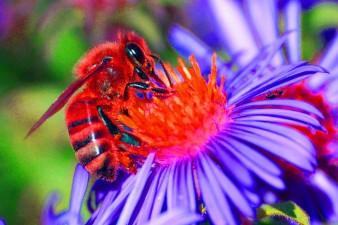 Turning to Bee Brains for Answers

Interestingly, the report above led to a more recent study, announced in 2013, which shows that naturally caffeinated nectar enhances the bees’ learning process. In other words, caffeine trains bee brains to come back for more.

In this study, caffeine improved the bees’ ability to remember and locate a caffeinated scent; it triggered brain activities involved with memory and olfactory learning. (Other studies on humans show caffeine improves some forms of memory, can be habit-forming, and activates the reward centers of our brains. I’ve also observed that just the smell of coffee puts people in a better mood.)

Essentially, the plant uses caffeine as a drug to change a pollinator’s behavior – for the plant’s own benefit. Geraldine Wright is a honeybee brain specialist – yes, there is such a thing – at Newcastle University in England. She and her colleagues reported their findings in Science (March 2013).

In the experiments, the plants stir up a sort of nectar-cocktail of chemicals, ones that the bees like and remember; in this case it’s a cocktail splashed with caffeine.

“The trick here is actually to influence the memorability of the signal using a psychoactive drug. And that’s a new trick in the book for plants,” said Dr. Lars Chittka, a bee researcher (not involved in Wright’s study), as reported in the New York Times.

It’s a win-win situation: plants serve their customers tasty nectar, and their customers pollinate the species. The tastier the nectar, the more the bees return to that species of plant.

In Dr. Wright’s lab, caffeine appeared to have a notable effect on memory, and this affected the bees’ behavior. The researchers tested the bees using sugar water – plain and caffeinated – as the rewards. As the New York Times reports:

“If you put a low dose of caffeine in the reward when you teach them this task, and the amount is similar to what we drink when we have weak coffee, they just don’t forget that the odor is associated with the reward,” she said. After 24 hours, three times as many bees remembered the connection between odor and reward if the reward contained caffeine. After 72 hours, twice as many remembered. They then tested the effect of caffeine on neurons in the bee brain and found that its action could lead to more sensitivity in neurons called Kenyon cells, which are involved in learning and memory. Dr. Wright said that this was one plausible route for enhancing memory, but was not definitive.”

The results go beyond whether bees prefer caffeine to decaf. The bees learned to like and want caffeine, and even just the odor triggered a response. According to researchers, this appears to confirm the notion that brain chemistry has intrinsic similarities across the animal kingdom. It is, as one scientist said, “like learning the language of the brain.”

It doesn’t mean caffeine sparks the same memory and learning reactions in humans, but it might.

For more on this topic, check out:

Caffeine improves memory in humans, millions of whom find that their daily dose enhances clarity, focus, and alertness. The human relationship with caffeine is relatively recent, however, and thus its impact on our brains is likely a by-product of its true ecological role. Caffeine occurs naturally in the floral nectar of Coffea and Citrus plants. Wright et al. (p. 1202; see the Perspective by Chittka and Peng) found that caffeine presented at naturalistic levels significantly improved the ability of bees to remember and locate a learned floral scent and potentiated the responses of neurons involved in olfactory learning and memory.

(I’m not sure I agree that the human-caffeine relationship is relatively recent; other scientists suggest caffeine may have been part of our evolution since early man. But daily, widespread caffeine use in our species is certainly more recent.)

I'm an author and journalist specializing in food and cooking. Caffeine Basics is my ninth book. I've written about the U.S. wine industry, international foods, shrinking your "cookprint," and cooking with kids. Great Bar Food at Home was a James Beard Award finalist, and Cooking Green: Reducing … END_OF_DOCUMENT_TOKEN_TO_BE_REPLACED